How to Easily Start an Internet Radio Station – for Free!

Do you have aspirations to be a radio broadcaster? Would you like to share your favorite tunes interspersed with a few words as to why you like them, or share other tidbits of wisdom on the airwaves? While you can start your own TV channel with YouTube, or launch a podcast and make it available on platforms like iTunes or Audioboom, setting up an actual Internet radio station is a bit tougher.

However, we’re going to put all of that to one side and look at how you can start your own Internet radio station. We’ll take a look at the equipment you need, the online services you should sign up with, how to deal with playing music legally, and how to attract listeners.

Once you’ve reached the end, you should be able to set up and run your own Internet radio station, perhaps leaving it running with minimum involvement other than a few occasional tweaks and recording the odd new link every now and again.

My Past Experience with Online (and Offline) Radio

I’m currently the weekly host of a community radio show on Zetland FM in the North East of England, broadcasting locally on 105 FM (and you can listen online to Zetland FM at www.zetlandfm.co.uk or on the TuneIn Radio app). My radio career officially started in October 2015, but really it started many years ago…

Back in the dim and distant past of the Internet, I hosted a comedy rock show on Live365 Internet Radio, a service which has since shut down. And since 2007 I’ve hosted a weekly Doctor Who podcast, which you can listen to at www.thepodkast.co.uk. If podcasting is something you would rather look at, my guide for setting up a podcast should help you out here. While podcasting and radio presenting are similar, they also have quite different aspects. Don’t assume that just because you can do one that you can easily do the other!How To Start Your Own Successful Podcast How To Start Your Own Successful PodcastPodcasts can be heard by millions of people worldwide. Now it’s easier than ever to collaborate, record, edit, publish, and promote your own show. We show you how.READ MORE

MakeUseOf has previously shown you how to set up your own online radio station for little or no expense. However, things have changed a lot over the past few years, with more dedicated services available to help you reach your online radio webcasting dream.

What You’ll Need to Get Started

If you’re still convinced that it is an online radio station and not a podcast that you want to launch, you’ll need to invest in some hardware. While an existing PC or mid-to-high end laptop should suffice at first (tablets and smartphones aren’t quite ready for the job), you may prefer to purchase a dedicated device so that you can keep the online radio station running without interruption from other PC tasks. Although an Apple MacBook or a Microsoft Surface Pro 4 might seem attractive options, you should be able to find a suitable device for under $1,000.

Next, you’ll need a good microphone. If your budget is tight, the Blue Snowball Ice is a good option, but it isn’t quite broadcast quality. For stepping things up to the next level, something like the HEiL Sound PR40 is worth considering – though it’s far more expensive.

While virtual mixing desks (such as VoiceMeeter) are becoming more widely used, having a dedicated device will reduce the load on your PC. However, if you’re producing an online radio show with no (or little) talking, then you probably don’t need a mixing console. Any between-track fades you need can be handled by the streaming software, for example. Mixing consoles are really for established radio stations with dedicated studios; at this stage, we’re assuming you’re broadcasting from your bedroom or study.

A good set of headphones is also required. This will help you to keep external distractions at bay, and focus on producing the radio show.

A few other things that you will also need:

Along similar lines, if you’re broadcasting a show with regular news topics, then you should probably make sure you have a reliable source of news. For locally-focused shows, ensuring you have people “on the ground” as it were, to report from particular locations, is a good idea.

If we had written a guide like this in 2009/10, there would have been some discussion about whether to stream your radio show directly from your computer using a tool like Winamp or via a stream hosting server (such as FreeStreamHosting).

Using Winamp (in conjunction with the Edcast plugin to convert the music into a stream, and IceCast2 to serve it) would have meant that your stream could only be listened to by a few people, due to bandwidth limits imposed by Internet Service Providers (they provide high download bandwidth, but much smaller upload for domestic users). ShoutCAST continues to be an option here, but the set-up is pretty dirty; it requires an expensive static IP and certainly doesn’t offer “out of the box” functionality – although the community support is strong. ShoutCAST does offer a more streamlined service for established Internet radio stations, however.

The alternative to this is to rely on a hosting server to stream your radio show to listeners. All you need to do is upload or stream your show to the server, and your audience will listen from there.

Put simply, unless you have massive upstream bandwidth, there’s no reason to host a radio station on your own hardware…

These days, things have moved on from collating a playlist with Winamp and streaming it. For a more dynamic approach to streaming your own radio station from the comfort of your PC, we suggest trying one of these dedicated services.

Your first option is Radionomy, which describes itself as “totally free, no matter how big your audience gets.”

They also share the station with the popular radio directories, and have you covered on music licensing (each time a song is played on the radio, royalties are paid, and if you don’t do this, you face financial ruin and shutdown; Radionomy pay the royalties on your behalf), hosting and streaming. You can choose to upload your own music or use the Radionomy library.

You can join using an existing Google or Facebook account, or by signing up to the site itself. Once you’ve done this, give the station a name, some descriptive tags, styles, a summary, and complete your profile. Don’t forget to upload the all-important radio station logo! Save these details to proceed, and wait as your radio station is created.

You’ll then get an email from Radionomy, which includes two important links. The first is to the support forum, which requires additional registration, while the second is a guide to using the service, which you should keep hold of as a reference (it’s 80 pages long, so you might want to read it later…).

Once you’re signed in, click Planner to head to the Box Management screen. Here, you can upload music, jingles, promotions, any voice tracks and so on, so that they can be accessed dynamically later. You can also create a playlist. Clocks and Day Templates can be created, the former giving you more precise results than the latter. For instance, if you have some feature that needs to be played at a specific time, you would add it here.

This video demonstrates how it all works: 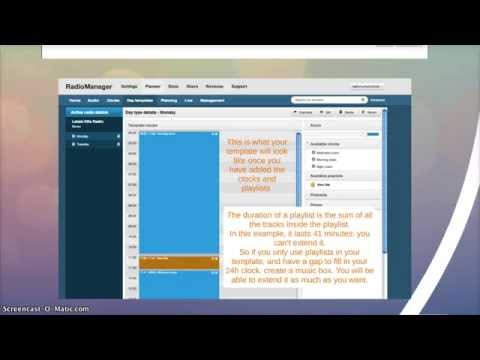 Once you’ve arranged everything and got things running, use the Stats and Revenues pages to get an idea of how well your station is doing, and use Settings > Social Share to spread the word online. You’ll also have the choice of using your own URL, or accepting the one provided by Radionomy, via Settings > Website.

Working on similar lines, but with a monthly subscription is Airtime Pro. Here you can choose from a Hobbyist account at $9.95/month with up to 64 Kbs quality, 2GB storage and a maximum of 10 listeners, all the way up to Premium at $99.95/month, with unlimited listeners, high-quality streams, and huge storage and bandwidth.

A free signup and 7-day trial is available, however, and once you’ve signed up and the station has been created for you (this can take a few minutes), you can log into the dashboard. Here, you can upload tracks, manage a playlist, and switch between a Scheduled, automated service or broadcasting as a Live DJ.

With tracks uploaded, you can start playing them to the world, and audiences can tune in via the URL given when you set up your account (for instance, [username].airtime.pro). Auto DJ shows can also be set up to play, running random tracks from your library. This video shows you how. 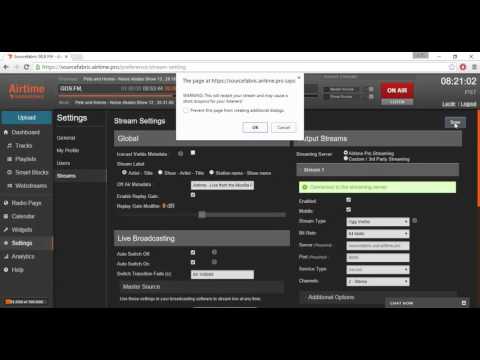 In all, Airtime Pro is easier to get to grips with than Radionomy; On the other hand, the automation options in Airtime Pro are good, but Radionomy just edges it here, we feel.

Too Hard? Try the Easy Way

If all of this sounds like far too much work and you just want to get on air to see how much you like it, then the answer is simple. Find a cheap microphone and headset (perhaps a combi), plug them in, and start streaming live using Skype, Google Hangouts, or uStream.tv.

Promoting an online radio station is much like promoting a website. So make sure you have a website or blog set up already, preferably with the radio station feed embedded into a prominent location (such as the header or sidebar) on every page.

To find an audience, you should also look offline, perhaps having t-shirts and flyers made, as well as sending out press releases to local and national newspapers and magazines. Meanwhile, once you have a radio station up and running and outputting a stream, you can add this to TuneIn Radio at tunein.com/broadcasters/.

Not only is starting your own online radio station simpler than ever before, it can be done with little expense. Now is the time to hit the virtual airwaves, getting yourself the experience you need to join a professional broadcast radio station, or build your own project up into something far bigger.

Of course you can use Services of Riggro Digital. Just Call today at

And Start Your Internet Radio Station!

Have you set up an online radio station? What tools did you use? Are you planning on starting soon? Use the box below to tell us all about it.

Facebook Twitter Pinterest linkedin Telegram
Now change the way you listen to a Radio! Internet radio: The New Way to Listen to a Radio Order our automated cloud servers & Get...

END_OF_DOCUMENT_TOKEN_TO_BE_REPLACED

Make your own internet radio station with Riggro Digital!

END_OF_DOCUMENT_TOKEN_TO_BE_REPLACED

How to Start Your Own Internet Radio Station Easy Way?

END_OF_DOCUMENT_TOKEN_TO_BE_REPLACED

Setting Up an Internet Radio Station: All You Must Know!

Facebook Twitter Pinterest linkedin Telegram
Fundamentals of Internet Radio Understanding the basics of setting up an internet radio station and how it works can help you k...

END_OF_DOCUMENT_TOKEN_TO_BE_REPLACED

How do I start a live audio broadcast on Facebook?

Facebook Twitter Pinterest linkedin Telegram
o start a live audio broadcast: At the top of your News Feed, tap the gray text next to your profile picture. Tap Live Video....

END_OF_DOCUMENT_TOKEN_TO_BE_REPLACED

How do I Stream Live Audio?

END_OF_DOCUMENT_TOKEN_TO_BE_REPLACED

How to Create an Internet Radio Station

Facebook Twitter Pinterest linkedin Telegram
Internet radio stations are accessible from anywhere in the world. This makes it a popular service for expatriates and for listeners ...

END_OF_DOCUMENT_TOKEN_TO_BE_REPLACED

4 thoughts on “How to Easily Start an Internet Radio Station – for Free!”

close
close
Start typing to see posts you are looking for.
Sidebar Scroll To Top